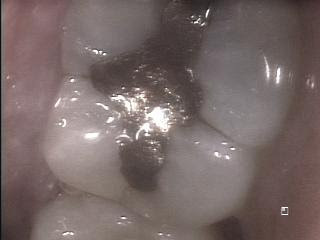 Well, the ole saying goes.. if it hurts.. its telling ya something! Ive had an issue with my left molar for a few weeks. Ive tried to ignore it because I don’t have dental insurance and I have an appointment in 5 weeks for a regular cleaning. However, after the pain I’ve been getting from it.. I decided maybe it was time to call the dentist. I really don’t like the dentist.. and as I told my dentist today.. i love you guys.. BUT.. Id rather not be here. 🙂 I figured it was just a cavity. It ended up being more than that. We took a look with this cool little camera she has and I got to see it on the computer screen. She took a pic of it and sent it to me. Cool eh? So, looking at things.. she discovered the tooth was cracked in 3 places and I needed a crown. It freaked me out. I’m a wimp anyway.. but not only was I thinking .. pain.. after I seen what the bill will be.. I was even more freaked out. However, it has to be taken care of.. one of the most awful things is tooth ache pain. So, now I’ve come home with a temporary crown and Ill have my “real” crown in April 30th. So, does this officially make me a princess with a crown? 🙂