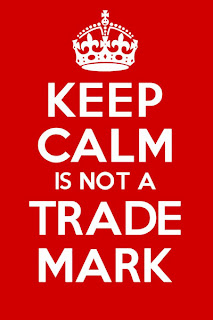 Please Note: the Carry On Hostess Exclusive stamp set in the new 2012-13 Stampin’ Up! Annual Catalog is currently unavailable due to unforeseen legal issues.We cannot help resolve this issue by contacting Stampin’ Up!, but perhaps we can help by spreading awareness and influencing resolve of what appears to be the core legal issue.

CLICK IMAGE OR CLICK HERE TO SIGN PETITIONAfter a short bit of internet research, I discovered that the EU granted an EU community trade mark for the words ‘Keep Calm and Carry On’ to a gentleman named Mark Coop in the UK, on March 25, 2011. Since then, it appears that Mr. Coop has been directing merchants all over the internet/world to take down merchandise with the wording, in an attempt to enforce his trade mark.

Trade Mark Direct, a trade mark service in the UK, claims the granting of the trade mark was a mistake and that no single person or entity should have been granted a trade mark for the wartime phrase, which has become public domain in our contemporary culture since the rediscovery of one wartime poster in a bookstore in the year 2000.  Mr. Coop reportedly received the EU community trade mark after his UK application was denied.

Bottom line, there is a UK campaign working to cancel the trade mark, and you can sign the petition here:

Apparently Mr. Coop is also pursuing trademark/copyright of ‘Keep Calm and Carry On’ in the United States and Canada.  My hope is that our support of the UK Keep Calm Campaign will prevent the perpetuity of this unscrupulous trade mark snatching on our shores…nip it in the bud, so to speak.

Check it out, see what you think, and if you are as disgusted as I am at the idea of someone trying trade mark/copyright something that’s been public domain for the last 10 years, sign the petition.