It’s Friday! I haven’t blogged in a few days. Yikes! Tonight was the last of the Friday Night Live series here in downtown Ludington. I love to waunder the street. They close off around 3 blocks of Ludington Avenue, they have the farmers market along w/ lots of fun stuff for the kiddos (pony rides, bounce houses), food booths, and local bands. My favorite coffee place downtown, Redolencia, had a one man band in front of his place. This guy rocked. His name is Nick Minkoyvij and his buddy down the block, Chad Rushing were both performing some great stuff. Very talented! I bought a CD and Ill have to feature them both on onf of my shows soon on Absolutely Radio Bug soon – so stay tuned (Monday Nights, 7pm EDT for my 2 hour show). Nick was playing the Didgeridoo. Have you ever watched Survivor on TV? Its the same instrument they use for the music on the show. So, what is a Didgeridoo exactly? (I had to ask Nick myself). Well I have the answer just for YOU!!! I googled it. This is the wikipedia definition:

The didgeridoo (also known as a didjeridu or didge) is a wind instrument developed by Indigenous Australians of northern Australia at least 1,500 years ago and is still in widespread usage today both in Australia and around the world. It is sometimes described as a natural wooden trumpet or “drone pipe”. Musicologists classify it as an aerophone. The instrument is traditionally made from Eucalyptus trees which have had their interiors hollowed out by termites or died of other causes.
There are no reliable sources stating the didgeridoo’s exact age. Archaeological studies of rock art in Northern Australia suggest that the Aboriginal people of the Kakadu region of the Northern Territory have been using the didgeridoo for at least 1,500 years, based on the dating of paintings on cave walls and shelters from this period. A clear rock painting in Ginga Wardelirrhmeng, on the northern edge of the Arnhem Land plateau, from the freshwater period[1] shows a didgeridoo player and two songmen participating in an Ubarr Ceremony.[2]
A modern didgeridoo is usually cylindrical or conical, and can measure anywhere from 1 to 3 m (3 to 10 ft) long. Most are around 1.2 m (4 ft) long. The length is directly related to the 1/2 sound wavelength of the keynote. Generally, the longer the instrument, the lower the pitch or key of the instrument. 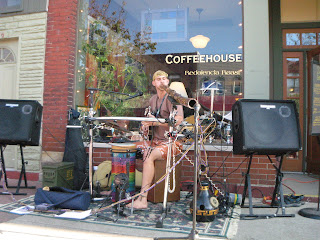 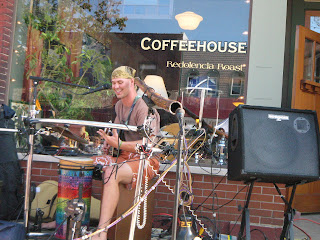 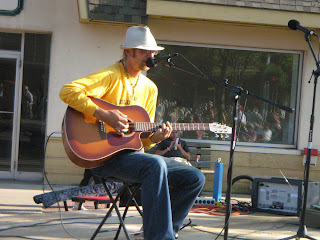 It was fun. I got out of the Inn for about 2 hours and enjoyed the music.. the food.. and visiting a few friends along the way too! Have a great weekend.. and keep rockin! Be creative!